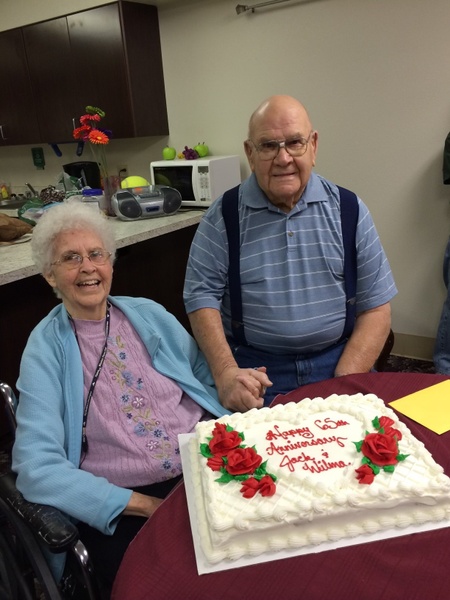 Wilma was born and raised in Vernal, Utah on her family ranch, where at the age of 16, she was introduced to the love of her life, Jack McArthur, by her stepfather, Lew Littleton.

Jack and Wilma were married on December 5, 1948, and settled down in Randlett, Utah where Wilma worked hard on the family farm, while Jack worked construction, and in the oil fields.

When Jack enlisted in the Airforce, and they moved to Columbus, Ohio, where they welcomed their son Lewis into the family. After his military service, Wilma and Jack moved back to Randlett where they continued to run their family farm, with Wilma raising sheep and chickens.

In 1966, they moved their family to Lewiston, Idaho where they opened Jack’s Service Station. Wilma worked for Frie’s Market, Newberry’s, and Payless Drug, where she met many good friends.  Wilma really enjoyed her time working in the fabric department at Payless Drug, a dream job for Wilma’s passion for sewing, knitting, and crocheting. Wilma was an amazing seamstress, often times sewing and repairing her own, and other family members clothing. She also enjoyed teaching her grandchildren to do the same.

Wilma always enjoyed crafts, and new projects around her home.  She also loved country western and most of all she loved being with and laughing at life with Jack.

After retirement, Wilma and Jack maintained their home in Lewiston, Idaho, while enjoying the snow bird life together in Bouse, Arizona. They would often share stories about their adventures in the dessert on their quads “Hisy” and “Hersy”, finding new locations to share a slice of pie with friends, and the crazy treasures they would find at the area swap meets!

After their time in Lewiston, Idaho, Wilma and Jack moved to Coeur d’Alene, Idaho to be near their son Lewis and his family.

In 2015, Wilma was preceded in death by her best friend, and the love of her life, Jack. Wilma would often share stories about the time she had with Jack, and she continued to miss him every day until her death.

Wilma was also preceded in death by her paternal father, Ezra Wilkins, her mother, Edna Wilkins-Littleton, and her stepfather Lew Littleton, as well has her infant son Bradley Jay McArthur, and brothers Vaughn Wilkins, and Irvin Wilkins.

Wilma loved good stories, she loved her family, and wanted them too always be happy!

Wilma ashes will be forever interned with Jack’s, at the Avalon Cemetery in Uintah County, Utah, on June 16, 2022 at 2pm.

To order memorial trees or send flowers to the family in memory of Wilma Ellen Wilkins- McArthur, please visit our flower store.