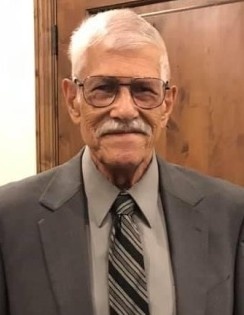 Warren William Banner age 83, passed from this life to sleep until the triumphant return or Christ, to then be reunited with his wife Myrna and all his loved ones.

Warren was raised on a family farm in Murray, UT. He attended Jordan High School, he served in the US Navy on the aircraft carrier Shangri LA during the Korean War from 1955-1961.

He then married Jacqueline Rogers in 1959. They divorced in 1966, they had two sons together Danny & David Banner.

Warren then met the love of his life Myrna Joy Mathis in San Diego, California they were married in August 26, 1967 in Las Vegas, Nevada at the Wee Kirk O’ the Heather’s Chapel. When he married Myrna, he helped her raise her four children, daughter Vickie and her three sons Paul, Jimmy and Scott, Warren also brought with him into the marriage his two sons.

Warren was a hard worker and provided for his family, shortly after they married, they moved from California to Twin Falls Idaho, where he drove truck in the sugar beet fields, he was an orderly at a care center, then they moved to Vernal, Utah where he worked for Dowell trucking the Gilsonite mines and later became a baker at Days Marker for several years. Warren & Myrna moved to Moab where they owned a bakery for 4 years, shortly after they had moved to Angwin, California where he worked in the bakery at Pacific Union College and retired from there and returned to Vernal in 1990. Warren worked in maintenance for Uintah County housing form 1990-1994 he also worked for Uintah School District as an aide with the troubled youth from 1994-2005.

Warren was a loyal and faithful member of the Seventh Day Adventist Church. He loved Jesus Christ.

Warren always had a smile he was a big tease and always had everyone laughing. He enjoyed fishing with his sons and taking the family to the beach and camping. He loved having a beautiful garden with many vegetables and fruits, He and Myrna loved spending time together and enjoyed being with their children and grandchildren. They loved having pets mostly dogs and treated them like babies.

He was a wonderful husband and cared for his wife till her passing, he would do anything for her. They were married for 51 years before Myrna’s passing in May of 2019.

Warren is preceded in Death by his wife Myrna Joy Mathis, his parents Earl J and Margaret (Francis) Banner, his sister Karrol and three brothers Dave, John, and Lynn.

Memorial Services Thursday, April 1, 2021 at 11:00 a.m. @ Blackburn and Sons Vernal Mortuary. Family may greet friends one hour prior to the services. We will travel to Maeser Fairview Cemetery for Military Honors by American Legion and US Navy.

To order memorial trees or send flowers to the family in memory of Warren Banner, please visit our flower store.