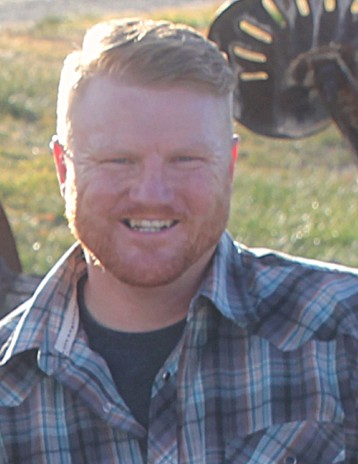 Spencer Joseph Wagner came into this world just after midnight on August 1st 1983.  He left this earth just after noon on October 3rd 2018 at the age of 35.  He had worked all night at his job, and on his way home from work that morning he delivered a load of pumpkins from his garden to family, then before he went to bed he took his dogs for a run while riding in his side by side and was involved in an accident.  That is how Spencer was; he always came last after everyone else was taken care of.

Spencer is the fourth child of Stan and Sarah Wagner.  He has three brothers and three sisters.  He is a member of the Church of Jesus Christ of Latter-Day Saints.  He lived as a disciple of Christ; following his Savior’s example by loving and serving everyone he met.  He started life in Ballard Utah then moved to Vernal Utah Where he was raised and went to school.  He graduated from Uintah High School in 2001.  It is hard to believe but growing up he was quite anti-social, quiet, and mostly kept to himself.  He was always outside building something or tearing things apart to see how they worked.  He was always busy tinkering and working on projects; he could never just sit and do nothing.  A trait he kept throughout his life.

He was very athletic.  Although he played baseball, softball, volleyball and golf, his true talent and passion was soccer.  He played through high school and made the All-State soccer team as goalie.  When he became a father he started coaching his daughter’s soccer and softball teams which included, nieces, nephews, and countless children who will all remember the fun they had learning from Coach Spencer.

After high school Spencer met the love of his life and his best friend Sarah Breanne Edgell.  They were perfect for each other.  They truly brought out the best in each other, and brightened the lives of those around them.  They were married on August 21, 2004 in Vernal where they started their family.  They were blessed with four daughters, Kadence Brooke (13), Rylee Paige (12), Morgan Brie (deceased), and Olivia Louise (7).  They were later sealed as an eternal family on March 12, 2010 in the Vernal Utah Temple.  He loves all five of his girls more than anything.  They are everything to him.  He always told everyone that he would allow his daughters to start dating when they reached 300lbs or turned 30 years old, whichever came first.  He will always be watching over and protecting all his girls.  He will be their special guardian angel throughout their lives.

Spencer was extremely strong and very hard working.  One time he packed out half an elk, a very large bodied bull, up a very steep mountain in one trip and acted like it was no big deal.  It wasn’t even his elk.  That’s how he was; he worked very hard for anyone who needed help, whether they asked or not.  Countless family, friends, neighbors, and even complete strangers have been blessed by Spencer’s Christ-like service.  He loved to help everyone, no matter the circumstance.

Spencer always worked hard to provide for his family.  He started in the oil and gas fields of Utah and Colorado just out of high school.  Then he went to work for Ziegler Chemical at the Gilsonite mines in Bonanza Utah.  In 2006 he went to work for the Deserado coal mine in Rangely Colorado were he has been for the last twelve and a half years.  He was an underground maintenance foreman on the graveyard shift.  He will be missed at the mine by all, especially the many close friends he made who he considered his brothers.

Spencer was very talented in so many ways.  He loved to work with wood, antlers, and metal.  He created so many beautiful and amazing works of art and decoration and then would give them away as gifts to family, friends, or anyone he thought could use a smile.  Anything he worked on with his hands turned into something special that he would give to someone he thought needed it.  Spencer’s biggest and most important talent was his ability to make people laugh.  He was so quick-witted and intelligent he could get even the most serious and boring people to laugh.  He was always the life of the party and brightened everyone’s day when he was there.  He never ceased to amaze with his unique character and personality, making huge impressions on everyone he met.  Anyone who has been around him any time at all has several “Spencer stories” to tell.  He truly loved making people happy, especially children.  He loved to tease, wrestle, and play with kids, and they loved and idolized him very much.

Spencer loved anything that had to do with the outdoors.  He loved camping and going for rides with his girls, hunting, shooting, fishing, hiking, and horn hunting to name a few; and no matter where he was he was always on the hunt for trees, branches, and logs for future projects.  He loved his new truck and his old tractor, “Mr. Awesome”, and had great joy using it to plow snow, and sometimes buried lines, from his neighbor’s driveways.  He also loved all the tools and machines that he used for his hobbies.

Spencer and Sarah moved their family to Rangely Colorado where they live on a little ranch down river.  They have many animals that they have as pets and raise for 4-H.  Spencer had a special place in his heart for animals, especially dogs.  Some of his favorites were Trigger, Duke, and Daisy.  Little Daisy was with Spencer in the accident and faithfully and loyally stayed at his side the whole time, until the responders came and had to pry her away from her best friend and master.

He was preceded in death by his infant daughter Morgan Brie Wagner, Brother Simon Jay Wagner, and Grandparents William and Emma Thomson, and Kilton and Margaret Wagner.

Spencer’s passing has left a huge hole in our lives and hearts that will never be filled.  The world is a little dimmer and sadder, but we know because of Jesus Christ’s atonement and resurrection we will be together again one day.  Until that day, Spencer, we love you and miss you and look forward to being with you again.

Funeral Services will be conducted on Wednesday, October 10, 2018 at 11:00 AM at the Rangely LDS Chapel.

To order memorial trees or send flowers to the family in memory of Spencer Joseph Wagner, please visit our flower store.
Send a Sympathy Card