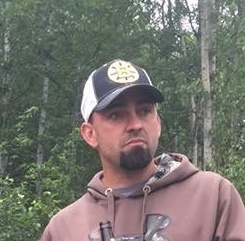 On Friday December 7th, 2018 Shawn Kelly Huber,  husband, father, brother and friend passed away suddenly at the age of 36.  Shawn was born on November 16th, 1982  in Vernal, Utah.  He was raised on his family's farm in Lapoint, Utah working alongside his father and grandfather he learned the value of hard work at a young age.  Shawn loved all sports including playing football.  He moved to Anchorage,  Alaska with family and attended East High School where he met his high school sweetheart Stephanie and was married on October 12th, 2002.  In 2002 they moved back to Utah where they were blessed with two children Shawnie and Trenton. In 2011 he and Stephanie moved back to  Alaska where they enjoyed various activities including hunting, fishing, snow machining, and four wheeling. They were then blessed with another child in 2013 , Aubrey. Shawn's greatest  passion was to watch his children play the sport they loved which was hockey.  Shawn was talented in many aspects.  His hobbies included woodworking, researching, and gardening.  But above all else he enjoyed being with his family.  Shawn worked over 10 years in the oil field on a drill rig and was an inspiration and mentor to all that knew him.  His hard work and dedication to his family and colleagues never went unnoticed.  Shawn will forever be remembered by his wife, children, family and friends as a loving, hardworking, and devoted father and husband.  Shawn is preceded in death by his father Kelly Huber, Grandfather Glen Huber, and Uncle Jim Oliver.Shawn is survived by his wife  Stephanie Huber , their three children Shawnie, Trenton, and Aubrey, Shelly Chivers (mother), Shad Huber(Brother), Rasheem Reid (Brother), Shirley Huber (Grandmother), Steven Delimont (Father-in-law) ,Marti Delimont ( Mother-in-law), Tyler Delimont ( Brother-in-law), Madison Delimont ( Sister-in-law) as well as many other aunts, uncles and cousins.

Funeral services will be conducted on Monday, December 17, 2018 at 11:00 AM at the Lapoint Ward Chapel. Viewings for family and friends will be Sunday evening from 6-8 at the Blackburn & Sons Vernal Mortuary and the day of the service 9:45-10:45 prior at the Chapel. Burial will be in the Lapoint Cemetery.

To order memorial trees or send flowers to the family in memory of Shawn Huber, please visit our flower store.