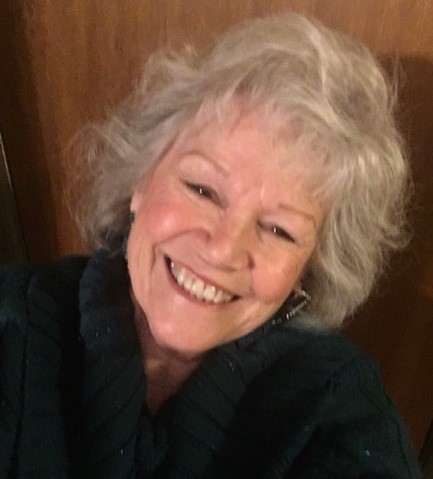 Penny passed away peacefully on March 15th, 2022, with her children at her side after a courageous battle with ovarian cancer.  Penny was born in Long Beach, California on February 6th,1945 to C.L. (Rusty) and Alice (Berry) Wells. After spending the majority of her youth in California, Penny later moved to Salt Lake City, Utah to finish her senior year, graduating from West High Class of 1961.

Penny enjoyed growing up on the beaches of California with family and friends.  A talented musician and vocalist, she played several instruments including the guitar, piano and the accordion (which she initially loathed but her parents insisted).  She enjoyed cheerleading throughout her high school years and was a very creative artist.  She exceled at anything she put her mind to. Penny had a love of antiquing that she inherited from her mother as they endlessly pursued treasures from small and unique shops. She also enjoyed traveling with her many friends and family.  Her adventures ranged from Israel to the Caribbean and Las Vegas where her Luck of the Irish proved successful many times.

In 1962, she married Phil G. Hatch and made Salt Lake City their first home. Later, they built a new home in Pleasant Grove where they raised three children on the family farm.  After 18 years of marriage, they went their separate ways and she started a new life with her children.  Four years later, in September 1983, she married the love of her life, Byrrell Lamb, and moved to Vernal, Utah where they raised their blended family.

Penny’s many career accomplishments included floral design, dermatology nursing assistant and spent the majority of her career as a licensed cosmetologist and esthetician. She was an incredible homemaker, cook, seamstress and devoted mother to her children.

Penny was a blessing for all those who had the pleasure of experiencing her constant cheerful outlook, wicked sense of humor, sparkling eyes and infectious smile.  Penny will be remembered for her beauty both inside and out, her grace, selflessness and kindness to others.

Survived by her children: Kelli, Phil (Kristin), and Kati (Dave), grandchildren Kaitlynn, Brady, Danaka, Reagan, Baylie, Gavin and Gentry and great granddaughter Allaria.  She loved her extended and blended family which included her stepchildren, their families and many other nieces and nephews. She is preceded in death by her husband Byrrell, her parents, her siblings Carolee, Michael and her grandson Lance.

We are honoring Penny’s wishes by not holding a formal viewing or service. Her Celebration of Life will be announced and held later this year.

To order memorial trees or send flowers to the family in memory of Penny Dee Wells Lamb, please visit our flower store.