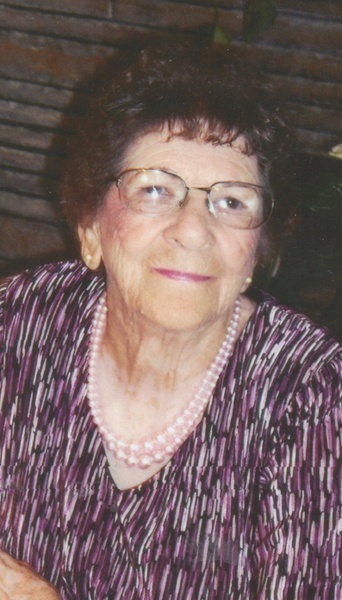 Nelda Gray Cook, 92, passed away on November 23, 2017, at the home of her son and daughter-in-law, Creg and JuNae Cook of Dry Fork, Utah. She was born on August 2, 1925 in Vernal, Utah to Samuel James and Jennie May Jones Gray. She was the fourth of six children. Nelda attended Maeser School and Uintah High School. On October 5, 1946 she married Harold H. Cook in Jensen, Utah. Their marriage was solemnized in the Salt Lake Temple on August 13, 1963 where their son and daughter, Creg and Penny, were sealed to them. She was an active member of the Church of Jesus Christ of Latter-day Saints where she served in several positions including Sunday School teacher and on the Ashley Stake M.I.A. Board. She was a member of the Daughters of the Utah Pioneers, the Uintah County Searchettes, the Uintah County Chamber of Commerce and was a charter member of the Uintah County Hospital Pink Ladies. She worked as a waitress, Mountain Bell switchboard operator and for the school lunch program. She enjoyed camping, hunting and getting firewood with her family and friends. Nelda is survived by her son, Creg (JuNae) Cook and daughter, Penny (Mike) Adams of Vernal; six grandchildren, Derick (Tami) Adams, Tory Adams, Rory (Melanie) Cook and Brandon (Tamera) Cook of Vernal, Tiffany (Scott) Bailey of San Antonio, Texas; Lex (Liz) Cook of Crowley, Texas; 24 great grandchildren and two great - great grandchildren, brother Lowell (Linna) Gray of Wellington, Utah and sister Jennie Veve "Peggy" McArthur of Roosevelt, Utah. She is preceded in death by her husband, parents, brothers Melvon Gray, Marcell Gray and sister Elna Winward. Funeral services were held Monday, November 27, 2017 at the Rock Point Chapel, 2575 N 1500 W, Vernal, Utah. Burial in the Rock Point Cemetery under the direction of Blackburn and Sons Vernal Mortuary. The family would like to give a heartfelt thanks to Dr. Shaun Shurtliff, his staff and her Canyon hospice nurses and aide.

To order memorial trees or send flowers to the family in memory of Nelda Gray Cook, please visit our flower store.