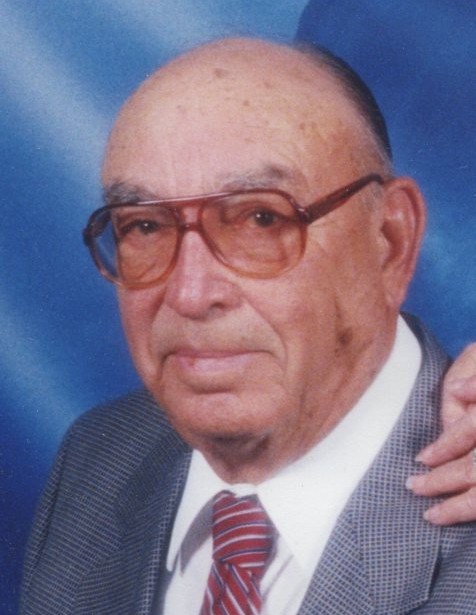 Max B. Rasmussen arrived into this world on November 6, 1920 in Vernal, Utah the precious son of Grand and Celestia (Batty) Rasmussen.  He married Jeannette Joyce Green in 1942.  Together they had 5 children.  Joyce passed away in 1990.  In 1991 Max married Patsy Massey Gerber.  She also had 5 children.

Max was raised in Lapoint, Utah along with his sister, Lessa who is eight years younger.  Although he loved her dearly, Max was a tease and never missed an opportunity to torment her.

Max grew up during the depression when times were lean and there was no money for extra's.   But if there was ever an extra egg, his sweet mother would let him take it to the Lapoint Store to exchange it for a piece of candy.

It was during the lean times of his childhood that he learned to work hard and he learned how to save.   Max never felt comfortable spending money on frivolous things.

Max attended Alterra High School where he graduated with the class of 1939. He believed he was the last surviving member of his class of 12.   After High School he attended Carbon College in Price, Utah. He graduated from Carbon's Trade School in Auto Mechanics in 1941.

In the spring of 1941, Max scored high on an Employment test from Lockheed and moved to California where he was hired as one of the instructors and was offered the unheard of amount of 41 cents an hour.

While he was in  California he met and married a beautiful young lady, Joyce Green.    This was during the height of WW2.   Max joined the Army Air Corp. and was assigned as an instructor.   He and Joyce were stationed all over the country.   Karen, their first daughter was born while they were in California.  It was in Florida where their first son Scott was born. After his time in the service was completed, they moved back to Vernal where their last 3 children where born, Gale Joye and Ann.

Max worked hard as a general contractor to support his young family.   He and Joyce were careful and always saved their money for a rainy day.

Max had a zest for life. He loved adventures, travel, the outdoors, fishing, camping, hunting and even shot an award winning deer which is the 23rd largest buck taken in Utah.

Max's greatest joys were the times spent with friends and family. He loved them one and all.   His quick wit, sense of humor, knowledge and wisdom will be greatly missed.

He is preceded in death by his parents, Grand and Celestia Rasmussen, his wife Joyce, Step Daughter Jacque Samuels and 2 great granddaughters.

To order memorial trees or send flowers to the family in memory of Max B Rasmussen, please visit our flower store.
Send a Sympathy Card