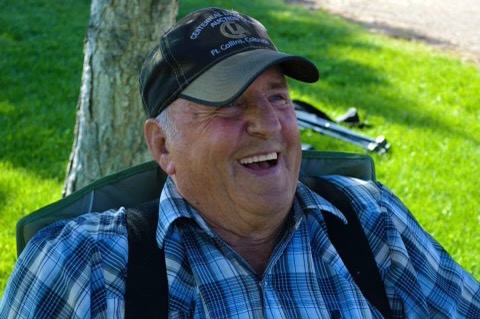 (If the livestream is not playing, we will still be recording the services and we will upload the service as soon as we can. Sorry for any inconvenience)

Marvin Albert Huber left this life to rejoin Genny and Larry on Monday morning, October 11, 2021, at his home on the farm in Lapoint, Utah. He was born in a log cabin, on that same farm, on August 2, 1933. Mugs was raised working the farm and learning the work ethic that would remain with him throughout his life.

Mugs graduated from Alterra High School. He entered the military and became a paratrooper, completing his military service with an honorable discharge just at the end of the Korean War.

He returned to the farm, and was here when his father passed, promising his father that he would remain on the farm and work it and support his mother, Irva, a promise he kept.

By this time, his sister Margaret was attending the BYU Nursing Program. One holiday weekend, Margaret brought home a friend who was also studying Nursing, Genevieve Lollar. Margaret left on a date of her own, leaving Genny with Mugs and his mom, and Irva told Mugs, “take her to the movies.” And the rest, as they say, is history.

They were married under the tree in the front yard on June 6, 1959. Their marriage was blessed with nine children: six boys and three girls. The children were kept busy with farm chores: haying, sheep and lambs, chickens, cows and calves, an occasional pig, but never goats. He also added a donkey or two, and that llama, but they were not some of his favorites. And then there were the farm dogs and cats, none of which he was particularly fond of, despite their usefulness. The children learned to work hard on the farm.

As the years went on, and Genny’s health began to fail, Mugs stepped up and began caring for her, while still covering all the needs of the farm. He showed selfless service and patience, but he loved having the grandchildren come and help him with her. The family began the practice of having Grandma and Grandpa over to dinner, one night a week. At one point, we offered to Grandpa, “we’ll bring dinner TO you.” and he replied, “no, it’s good to get out and see people, and not be stuck at home all day.”

Mugs appreciated his temple blessings and loved the scriptures. He served as a member of the High Priest’s Group. He was full of words of wisdom like: It doesn’t take much to amuse an idiot; Don’t do something you’d be ashamed to come home and tell your mother about; You’re just a pup, and If you’re in jail, don’t call home.

The family is grateful for every act of kindness that has been extended to us over the last days and weeks.

To order memorial trees or send flowers to the family in memory of Marvin "MUGS" Huber, please visit our flower store.
Send a Sympathy Card