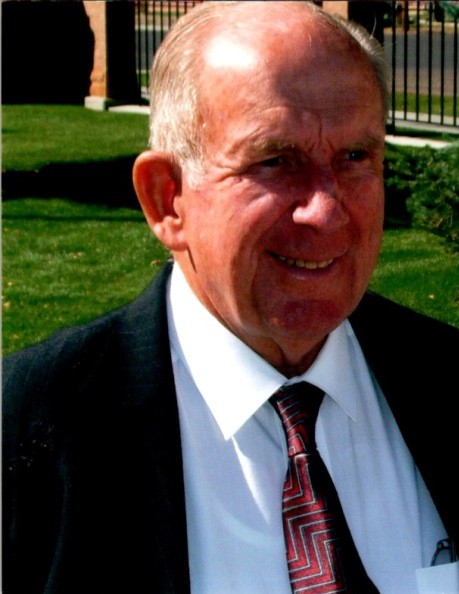 Click the blue highlight below to watch the Funeral Services live.

Surrounded by his wife and children, Mac Wilford Holmes, a beloved life-long resident of Vernal, Utah died on Monday, March 22, 2021 due to complications related to age.

Mac was born on January 28, 1933 to William“Billy,”Jr. and Emma (Olsen) Holmes. He graduated from Uintah High School in 1951, served in the Army during the Korean War, and began work with the local telephone company from which he retired in 1990 after 35 years.

He married Marian Dudley on July 20, 1956 in Jensen at the home of Curt and Jessie Dudley. They were later sealed to their two children, Laurie and Allan, in the Salt Lake Temple on March 15, 1965.

He was a loyal father and grandfather and fostered a strong bond among his family by building strong family traditions and memorable experiences. He enjoyed camping, fishing, and hunting with his family and growing a beautiful garden which included cantaloupe and watermelon to share with neighbors, family, and friends. He often said what he enjoyed most was gathering for family barbecues, birthdays, and holidays. His family never doubted his devotion and reaped the benefits of his constant, attentive regard for their well-being.

He spent the better part of two decades volunteering as Santa Claus throughout the community for family parties, church gatherings, work celebrations, and even private visits just before Christmas Eve. He was known for the generosity and kindness associated with that role [1] outside of the holiday season.

Mac exemplified Christ-like service by volunteering in various capacities for the Church of Jesus Christ of Latter-day Saints. He was called as bishop for six years,  another six years as high councilman, and next nine years as stake president. With Marian, he served a mission in Corpus Christi, Texas in 1993. Serving in the Vernal Temple from the time it was dedicated in November of 1997, he was called and set-apart as a temple sealer by President Gordon B. Hinckley on December 30, 1997 and later sealed many of his granddaughters to their spouses. He served in the temple presidency from the Spring of 1999 to the Fall of 2002. A year later, Mac was called to serve as the stake patriarch on November 9, 2003. He was later called as the temple president in the Fall of 2008 to the Fall of 2011.

Known for his strong testimony of the Savior and gentle regard for everyone within his association, his faithful and enduring service in the church was unwavering and constant. His departure from this life will be deeply felt by his family, friends, and all who knew him.

To order memorial trees or send flowers to the family in memory of Mac Wilford Holmes, please visit our flower store.
Send a Sympathy Card