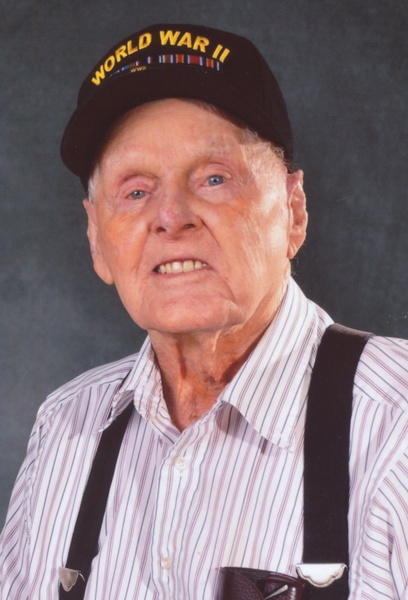 Loris Lee Wooley age 97 passed away surrounded by his family on Thursday October 12, 2017 in the Beehive Home in Vernal Utah. Prior to his passing he was a resident at Daniels Crossing where he had many friends. Loris was born on May 24, 1920 in Roosevelt Utah. He was the 8th of 10 children born to Arthur & Martha Pearl Draper Wooley. Loris graduated from Alterra High School in 1938. He then joined the Army in 1942 serving in World War II as a Sergeant. Loris married Vera June Huber September 11, 1945 in the Salt Lake LDS Temple. Loris is survived by his children, Lois (Jay) Hartle, Lapoint UT; Cheryl (Larry) Murray, St.George,UT; Roma (Harold -deceased) Farnsworth, Black Diamond,WA; Cloyd (Billie) Wooley, Lapoint UT; Glade (Kathy) Wooley, Lapoint UT; JaNae (Neil) Wilcken, Vernal UT; Elaine(Tom)Moore, West Valley City, UT. Loris is survived by his 7 children, 26 Grandchildren, 67 Great-Grandchildren and 9 Great-Great Grandchildren. Loris was predeceased by his wife June; parents Arthur & Pearl, brothers (Clark, Milton, Arlo, Cloyd, and Herman), sisters (Vergie, Leida, Ora, Thelma) and a granddaughter Angela Wooley. Loris was a dairy farmer by profession. He also worked carpentry with his nephew Buff Behrman. He served on the White Rocks Irrigation Water Board and played a major role in forming the Lapoint Culinary Water System. Loris served many LDS church callings including a full-time mission with his loving wife in Birmingham, Alabama. Loris enjoyed filling his bucket list which included things like a Hot Air Balloon Ride on their 50th Wedding Anniversary, skydiving at 89 yrs. old and a ride in a glider. He rode every mode of transportation, the last being a ride in an 18-wheeler. Loris was accompanied by Elaine Moore (daughter) on the Honor Flight to Washington DC to visit the Veterans Memorial. The family would like to extend their appreciation and sincere gratitude to the Beehive House and Good Sheppard Hospice for their loving care. Funeral Services will be held on Saturday October 21, 2017 @ 11:00 am at the Lapoint LDS Chapel in Lapoint UT. A viewing held on Friday October 20, 2017 from 6-8pm at the Blackburn Vernal Mortuary and at the chapel1 hour prior to the service. Burial will be in the Lapoint Cemetery wit Military Honors by American Legion.

To order memorial trees or send flowers to the family in memory of Loris Lee Wooley, please visit our flower store.