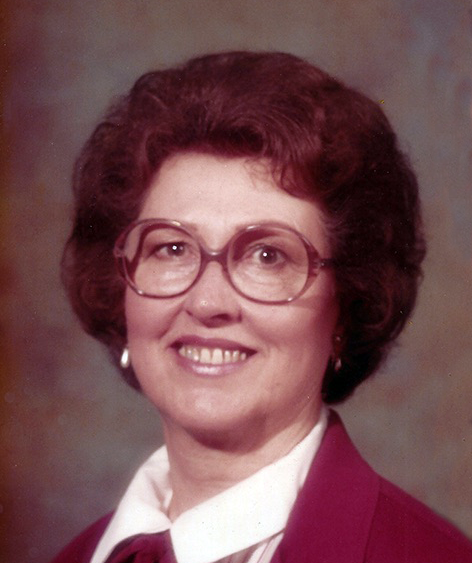 Lorene (“Rena") Cheney Runyan
1927 – 2019
Lorene (“Rena") Cheney Runyan passed away peacefully on October 12, 2019. Rena was born on March 28, 1927 to Aaron Elijah Cheney, Jr. and Sarah Ellen Blazzard in San Diego, California. She served a mission for The Church of Jesus Christ of Latter-day Saints to the British Mission (1950-1951). After her mission she met the love of her life, George Richard Runyan, while he was stationed in the Navy in San Diego . They married in the Salt Lake City Temple on August 25, 1952. They had been married for 67 years.
Rena was a dedicated wife and mother. She supported George and served with him on a Church Building Mission to Salt Lake City (1964-1966). The family moved there for George to be in charge of building two chapels from the ground up and to supervise the completion of two others. Rena served as his secretary and historian. After the building mission was completed, they made their home in the Denver area, where they raised their five children. In 1990, after George retired, he and Rena served together for eighteen months in the Santa Rosa California Mission. After their mission Rena spent many happy hours volunteering at the Beehive Clothing Center at the Denver Temple. In 2000, they left their Denver home of 32 years and relocated to Vernal, Utah, where they spent the remainder of their years together.
Rena was a member of The Church of Jesus Christ of Latter-day Saints and served in various church callings, including temple ordinance worker and Relief Society President. Even though the calling of Relief Society President was outside her comfort level, she truly enjoyed serving the sisters of her ward. Rena will always be remembered for her quick wit, her green thumb, and her love of old movies.
She is survived by her five children, Michael (Pamela) Runyan, Nashville, Tennessee; Daniel Runyan, Kanab, Utah; Susan (Walter) Gale, Vernal, Utah; Julie (Wayne) Millett, Aberdeen, Idaho; Thomas (Kristynn) Runyan, Meridian, Idaho; 25 grandchildren, 58 great-grandchildren, and one brother, Keith Cheney, San Diego, California. She was preceded in death by her husband, her parents, four brothers, two sisters, one grandson, and one great-granddaughter. Services will be held Saturday, October 19 at 1:00 p.m. at the Vernal 7th Ward Building, 845 West 100 North, Vernal, Utah. A viewing for friends and family will be held preceding the funeral from 11:00 a.m. at the church. A graveside service will be held Monday morning, October 21 (time TBD) at Ft. Logan National Cemetery, 4400 W. Kenyon Ave., Denver, Colorado, with interment following. Funeral Directors: in Vernal, Blackburn & Sons Vernal Mortuary; in Denver, Advantage Funeral & Cremation Services, Runyan Stevenson Chapel.

To order memorial trees or send flowers to the family in memory of Lorene Runyan, please visit our flower store.
Send a Sympathy Card