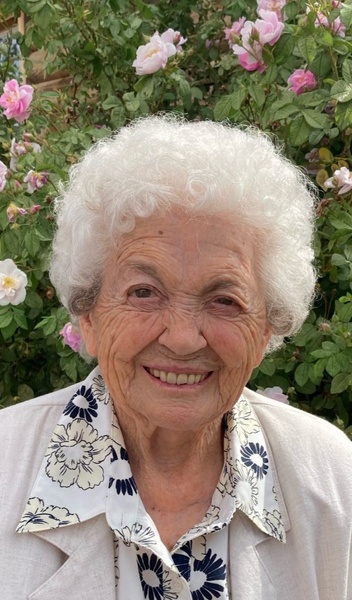 Kathryn was born on June 12, 1927 to Ardith Nielson and Frank Ervin Huber.  She came from very humble circumstances.  Kathryn was born in a log cabin, delivered by a midwife and grew up in the horse and wagon days. Her dad was a sheep herder and spent most of his summers in the mountains.  A favorite childhood memory was visiting him and having a picnic. Kathryn learned from her parents how to work hard, be resourceful, and to care for their possessions.  Kathryn started out as a very shy girl, but through her efforts and hard work gained confidence, and by the time she graduated she had many friends and was the salutatorian and the most popular girl in school.

She fell in love with Elroy Walker while dating on horseback.  They enjoyed chick-a-rees and watermelon busts until Elroy went into the service in World War II.  She waited patiently for his return and they were married in the Salt Lake Temple on April 30, 1947.

Kathryn grew into motherhood by raising her 9 children.  She believed in working together and playing together as a family, and has instilled those values in her posterity.  She was known for her famous raspberry jam and cheesecake, and was delighted to share that with everyone.  In her later years she was an avid quilter and made a quilt for every grandchild, and great grandchild.  Kathryn could make a great meal out of anything and was a wonderful cook.  Her favorite things in life were her family and playing a game of Rook.

She was devoted to the Special Olympics program until age prevented her from serving.   She was the postmaster in Lapoint for 19 years and loved this job and the opportunity it gave her to associate with the people of this community.  She loved to serve in the church programs and was an ordinance worker in the Provo and Vernal Utah Temples.

Kathryn passed away peacefully on June 14, 2022 at home surrounded by her loved ones.

We would like to give a special thanks to the Good Shepherd Hospice caregivers, Blackburn Mortuary for their love and service at this tender time, and to the members of the Lapoint Ward Relief Society and others in the area for their prayers and many kindnesses.

To order memorial trees or send flowers to the family in memory of Doris Kathyrn Huber Walker, please visit our flower store.