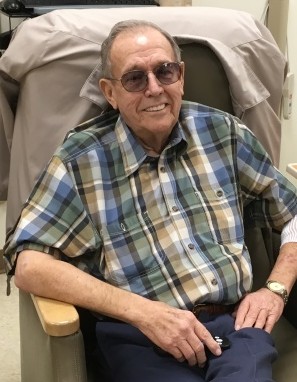 John Elbert Mueller, 81 of Jensen, passed away Wednesday, September 5, 2018 surrounded by many of his family members. John was born April 5, 1937, near London, Arkansas on the family farm to Zoe Viney & Earl Burgess Mueller. John Married his wife Judy Schulz in Wolf Point, Montana on February 5, 1971.

John began his career in the oilfield in 1955 in Sterling, Colorado working for Hayden and Griff Well Servicing Company. he worked for Phillips Petroleum in the drilling department in Colorado, Wyoming and Texas from 1956 trough 1958. From 1959 trough 1964 he worked for Rangely Well Services, Peacock Well Services and Baker Well Service as a rig superintendent in Eastern Montana and Western North Dakota. He was promoted to an Area Superintendent in Riverton, Wyoming and later became General Manager in Casper, Wyoming.

In May of 1979 he became Vice President and General Manager of Fields Operations for Pennant Service Company. In January 1987 he began working as a Rig and Drilling Superintendent for BC Wells Service primarily on geothermal wells in California. John returned to Rock Springs, Wyoming in 1992 and worked as Area Manager for Dunbar Well Service and Leed Energy. John finished his oilfield career in 2012 at the age of 75, working for Alliance Well Service in Rangely, Colorado.

Funeral Service will be held on September 12, 2018 at 11:00 AM at the Blackburn & Sons Vernal Mortuary. In lieu of flowers, donations can be made in John’s name to the Hope Lodge, (375 East 100 South, Salt Lake City, Utah 84111). Please visit our website to send Condolences to the family at www.blackburnvenralmortuary.

To order memorial trees or send flowers to the family in memory of John Elbert Mueller, please visit our flower store.
Send a Sympathy Card