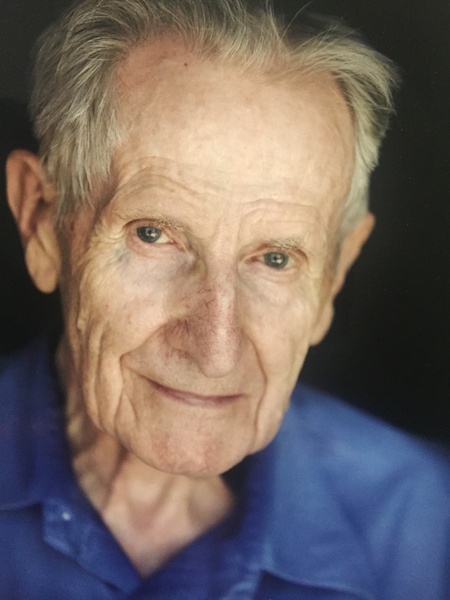 John Evan Jones was born January 18, 1922 in Birmingham, England, the only child of John Jones and Muriel Victoria May Stephens and was educated in English schools. During World War II John served a mission for the Church of Jesus Christ of Latter-Day Saints, traveling around the British Mission to consolidate the records of the districts and branches so they would not be lost during bombing raids. When he was released from this calling he served as branch president and counselor in one of the largest branches in the mission in addition to working as a civil servant for the Board of Internal Revenue. John came to the United States in July, 1948 and worked for the Deseret News as a reporter and writer. He then moved to Vernal in 1950 to work as news editor on the Vernal Express but was called on another mission and served in the Northwestern States Mission for two years before returning to Vernal and the Vernal Express. John married Ruth Lind on June 3, 1954 in the Salt Lake Temple. Ruth preceded John in death on December 16, 1984. John then married Doris A. Mott on September 14, 1985. John was best known for the 26 years he served as postmaster of the Vernal Post Office from 1966 to 1992, but his greatest passions were reading, writing short stories, and teaching. He had a deep and abiding testimony of the truth of the Gospel as taught by the Church of Jesus Christ of Latter-Day Saints and stated that he enjoyed nothing more than teaching and preaching this Gospel. John's greatest gift was his ability to help those around him feel his love for them and to instill a desire to be better. His greatest loves were his children, grandchildren and 7up. John was preceded in death by his wives Ruth Lind and Doris Mott, a son, Paul Colin Jones, and a daughter, Marva Ruth Jones. He is survived by a son, David Evan of Salt Lake City, two daughters, Sheryl Ann (Stoltz) of Miles City, Montana, and Irene Marie (Lysenko) of Centerville, Utah, nine grandchildren and four great-grandchildren. Also surviving are four stepsons: Niles and Merlin Mott of Vernal, Vaughn Mott of Salt Lake City and Max Mott of Layton, Utah. Funeral Services will be conducted Thursday January 4, 2018 at 2 pm at the Vernal 9th Ward LDS Chapel (250 North 200 West). All viewings will be at the Church. Wednesday 6-8pm and Thursday at the Church 12:45-1:45pm . Interment will be in the Vernal Memorial Park. Services have been entrusted to the care of the Blackburn & Sons Vernal Mortuary.

To order memorial trees or send flowers to the family in memory of John Evan Jones, please visit our flower store.
Send a Sympathy Card