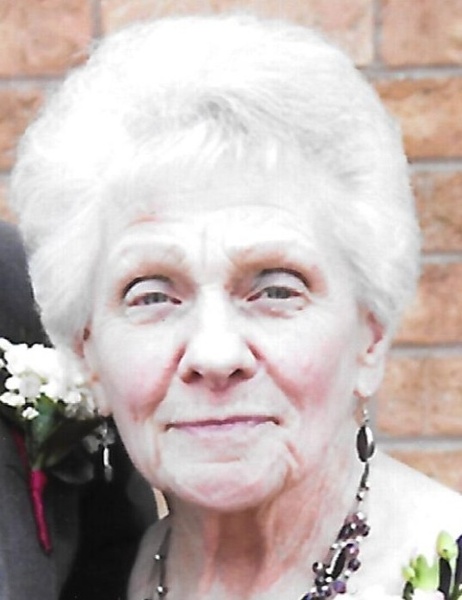 Joella Merkley Goodrich Richens, age 84, returned to her Father in Heavens’ arms on the afternoon of Thursday, December 6th, 2018 at the Uintah Care Center in Vernal, UT.

She was preceded in death by her husband Reid H. Goodrich, granddaughter Eowynne Anderson, 9 brothers and sisters, and her second husband Lorn Richens.

Joella was born to Joseph Nelson Merkley and Mary Luella Swensen Merkley on September 22, 1934 in Maeser, UT. She attended school at Maeser Elementary and Uintah High School.  Joella married Reid H. Goodrich on January 23rd, 1952 in the Salt Lake LDS temple. Reid passed away on August 28th, 2014. She later married Lorn S. Richens and had a very happy and fun two years filled with many adventures that were on their “Bucket List” before he passed away.

Reid’s military career took them to many wonderful places. Later Reid’s career as a child psychologist took them to Idaho and Utah schools. They later returned to Tridell, UT to raise their 5 children. Throughout her life she served in many church callings and was very involved in the Uintah Basin Foster Grandparent Program and was, and is still called Grandma by many “adopted” grandchildren. She made many dear friends, with whom she enjoyed spending time with and loved dearly. She loved hunting; fishing and spending as much time camping with family and friends as she could. She was a phenomenal homemaker and cook. She bottled the best peaches and dill pickles. Her and Reid’s homemade pizza was second to none. She loved her family and was beloved by them. She set a great example of being a hard worker. She loved studying the scriptures and working in the Vernal Temple.

A viewing will be held in Joella’s honor at the Blackburn Vernal Mortuary on Thursday December 13, 2018 from 6-8 PM and also one hour prior to the funeral services at the Tridell Ward LDS Chapel located at 10404 8000 E, Tridell, UT. on Friday December 14, 2018. Services will begin at 11:00 AM with interment immediately following at the Tridell Cemetery.

To order memorial trees or send flowers to the family in memory of Joella Goodrich, please visit our flower store.