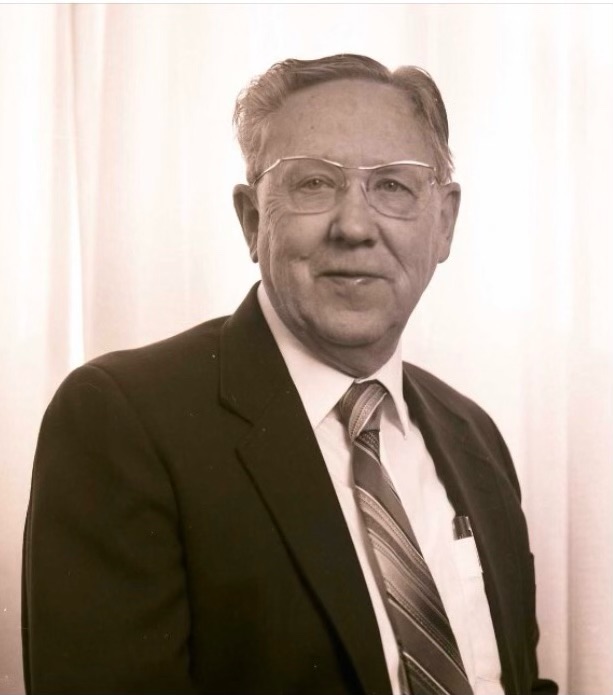 J. Harvey Madsen was born to Urban Sheridan Madsen and Ethyl Annie Jackson on May 31, 1926 in Fountain Green, Utah. He, as the eldest child, was raised and went to school in Fountain Green. He had lots of pleasant memories of that time with his younger siblings Margene (deceased) Owen (deceased) and his youngest sister Uvonne.

Harvey married his sweetheart, Vonneal Curits, in the Salt Lake Temple on August 14, 1944. She was truly the light of his life. He yearned to be with her again.

In 1945, Harvey joined the U.S. Army serving with the brave men and women known as the “Greatest Generation” who fought in World War II. He was on a troop ship when the bombs were dropped on Japan, saving his life. He spent the rest of the war on the clean-up in Japan.

Harvey and Vonneal set up housekeeping at Snow College for 2 semesters. He then went to the University of Utah where he graduated with honors, with a Pharmacy Degree.

After Pharmacy school, Harvey moved his family to Vernal, Utah where he worked at The Vernal Drug Co. Glen, Harvey & Glade were known as The Friendly Pharmacists. Harvey received the Bowl of Hygeia while serving as an officer of the Utah Pharmaceutical Assn. He also served on different committees of the Vernal Chamber of Commerce, including its president. Harvey also received the Chamber’s service award for spending 12 years as a city councilman.

Harvey loved the outdoors, best of all hunting and fishing.

Harvey devoted his entire life to The Church of Jesus Christ of Latter Day Saints. He had an unshakable testimony of Jesus Christ and served in any capacity called, including Bishoprics, Stake Presidency, Teacher, and as Stake Patriarch. Harvey and Vonneal served a mission in England. He was also very grateful to serve for many years in the Vernal Utah Temple.

Harvey is survived by 23 grandchildren and 52 great grandchildren. He was preceded in death by his wife Vonneal, a daughter-in-law Laurie Madsen (Jay) and by three grandchildren, Sheridan Madsen, Trisha Taylor and Makenzie Madsen.

Burial was in the Vernal Memorial Park with Military Honors, Services are under the care of the Blackburn Vernal Mortuary.

To order memorial trees or send flowers to the family in memory of Harvey Madsen, please visit our flower store.
Send a Sympathy Card