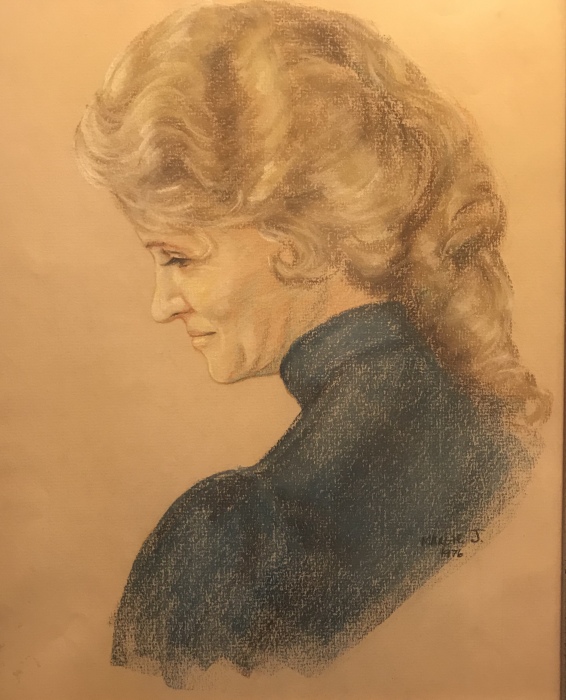 Gwenda began her life in Neola Utah as  the youngest of seven children to Morris Alton and Mary Perry Winn. She loved being with her dad working with the animals outside.  She did not like house work, and left that to her sister,  Mary Ann.  She loved horses, and learned to ride at a very young age. Her cousin who lived in Eugene, Oregon, and come to visit his uncle Morris and aunt Mary, said of her, " I saw this good looking gal with long black hair riding bareback, galloping up the dirt road coming to a halt in front of the house.  I was so taken by her, then found out she was my cousin.  What a disappointment!  she was a beautiful young woman."

Gwenda loved life, and lived it to the fullest. Her greatest joy was being outside with dad and their horses. They could be seen working together making their place nice and convenient for them,  for their horses, and others who came to visit. They loved racing their horses in Wyoming, Colorado, and California, winning many trophies and purses. They also were participants in the Dina Spurs, a riding club that was known throughout Utah and other states.  Gwenda was  president several times, and really wanted the club to continue.  She and dad made many friends with members of the riding club. Their friendships have lasted for many years. She has with loving fondness spoke many times of those she and dad rode with.

Mothers sense of humor was endless.  She could find humor no matter how bad the situation was.  She also had a quick whit that was virtually impossible to compete with.  Her humor combined with her whit could be dangerous to those who tried to out whit her.

She enjoyed sitting at the kitchen table, visiting, and having a cup of coffee with family and or friends telling stories about the good ole days.  Hunting arrowheads with the family was another enjoyment she had.  She could also handle a gun, and was able to shoot and clean her deer every year. One day we were out in the hills with her brother, sister-in-law, and family.  Aunt Orlean did not like snakes, and was told there was none around.  Mother had her pistol on her hip, and was walking, and looking for arrowheads when she spied a rattle snake.  Mother drew, fired, and we think the snake struck the bullet.  She came bringing the snake back to camp scarring poor aunt Orlean who while jumping up and down and running back to the truck screaming would not leave it until we returned home.

Gwenda was a great seamstress making and designing cloaks, ball gowns, and school shirts for her son.  She started Creative Décor and upholstery, of which she passed on to her grandson several years ago.  She also purchased GT and L supply, an oil field supply business.  With that business, she was able to launch dad into a NAPA store of which he ran for many years before retiring.  She retained the Triangle building up to the time of her death.

Gwenda was a Member of the Church of Jesus Christ of Latter-Day-Saints, but was not a church going person. She and dad were planning to attend the temple before he passed, but was not able to do so until a year after his passing.  She loved the people of Ashley Ward and enjoyed having the visiting teachers and home teachers come to the house.  She  never wanted to leave the Ward.  She knew the people, where they lived, and who their families were. She spoke often with love and respect when speaking of the Ward members, both past and present.

Funeral services will be conducted on Saturday, February 23, 2019 at 11:00 AM at the Ashley 1st Ward The Church of Jesus Christ of Latter -Day Saints (3040 North Vernal Ave.) Viewings will be Friday from 6-8 PM at the Blackburn & Sons Vernal Mortuary at the Chapel one hour prior to the services. Burial will be in the RockPoint Cemetery.

To order memorial trees or send flowers to the family in memory of Gwenda W Mackay, please visit our flower store.
Send a Sympathy Card