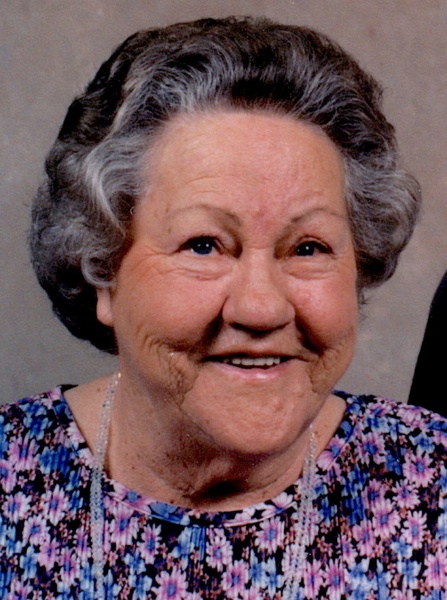 Grace Rasmussen Moore was born August 25, 1926. She passed away November 1, 2018 at home. She is survived by her son, Rickey Charles Moore and daughter, Pamelia Moore Searle, both of Lapoint Utah. She was preceded in death by her husband , Charley Reo Moore; daughters;  Linda Kaye Moore, Dixie(Glen) Harlte, her parents , Fred and Lilly Rasmussen; sisters, Marian Murdock and Hazel Davey; Brothers, Garth Rasmussen, Max Rasmussen, and Jess Rasmussen. She leaves 7 grandchildren and 21 great grandchildren.

Grace was born in Oakley, Utah to Fred and Lilly Rasmussen. She lived in Peoa, Utah for 15 years and then her family moved to Park City, Utah where she graduated form Park City High school.

She loved to dance to the live music of the big band era. Her favorite was Benny Goodman.

Grace married Charley Reo Moore on August 21, 1945. There marriage was later solemnized in the Salt Lake LDS Temple on May 14, 1957.

Throughout their married life, Charley traveled for work to provide for his family. Grace supported him in these endeavors. At this time in their life the family lived in Cordero, Nevada, Jeffrey City, Wyoming, Palestine, Texas, and primarily in Park City, Utah.

She was a member of the Church Of Jesus Christ Of Latter Day Saints. Throughout her life she worked in church callings in the Primary, Relief Society, and Young Womens. She loved the scriptures especially the one that says that we live by faith.

She was first and foremost a mother. Her homemaking skills were evidence by the many clothes she sewed for her children throughout their lives. She was an excellent cook, and we will all miss her fudge.

Later in life Grace was able to take her family to San Francisco. This became a treasured memory of the family.

Funeral Services will be Monday, November 5, 2018 at 11:00 A.M at the Lapoint LSD Chapel. A viewing will be held one hour prior to service. Burial will at the Lapoint Cemetery, under the care of the Blackburn and Sons Mortuary.

To order memorial trees or send flowers to the family in memory of Grace Moore, please visit our flower store.