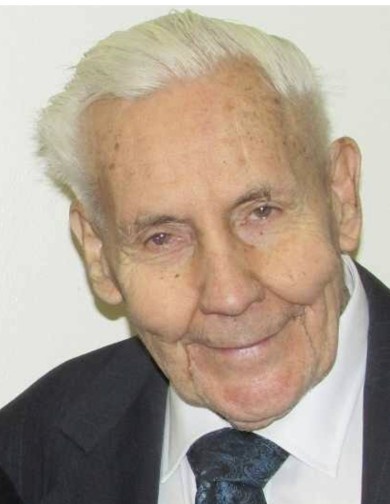 George M. Johnson departed peacefully to heaven from Vernal, Utah at the age of 95.

He was born in Brigham City, Utah. George was born to James Arthur Johnson and Hortense Castella Malmrose. He served in the Army as a radar technician in the Aleutian Islands during WWII. After serving a mission to the southern states mission, he then attended the University of Utah, graduating with honors with a degree in Accounting.  He practiced as a CPA with several accounting firms and later had his own accounting practice.

He married Leone Viola Patterson on November 17, 1948 in the Salt Lake Temple. They had nine children. Leone passed away on May 13, 1999 after 51 years of marriage.  He married Beryl Genevieve Cornelius on April 22, 2000.

He had numerous callings in the Church of Jesus Christ of Latter-Day Saints and was a high priest in the church.

George will be remembered as a gentle, kind man, willing to assist anyone in need. He exemplified true Christian virtues of love, loyalty, obedience, and charity. He will be missed.

Funeral services will be Saturday, September 7, 2019 at 12:00 noon at the Vernal 1st Ward Chapel (475 West 100 South). Viewing: Saturday at the chapel 10-11:45 prior to the services. Burial will be in the Memorial Gardens, California on September 12, 2019. Services are entrusted to the care of Blackburn & Sons Vernal Mortuary.

To order memorial trees or send flowers to the family in memory of George M. Johnson, please visit our flower store.