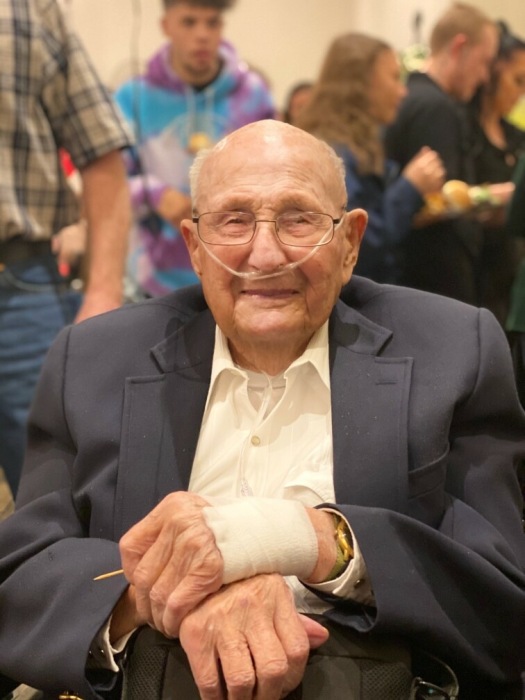 Gene McFarland was born in Chase, Kanas on March 7, 1920 to Roscoe and Ethel McFarland.  He passed away at his home on November 15, 2020.  Gene was raised on a milk farm in Kansas until he enlisted in the Navy.  The Navy had to wait 6 weeks for him because he broke his leg on that farm.  He was deployed into the Coast Guard before he went to a battle ship in the South Seas and the Philippines during World War II.  He was a gunner on the Missouri when it was hit and his back was broken.  Then he was assigned to the air craft Enterprise.  He was honorably discharged.

When he returned to the USA, he started working in the trucking business and eventually owned his own truck, and started Rocky Mountain Trucking Co. in Casper, Wyoming.  He hauled casing for the oilfield.  He also built Thunderbird Trailer Park, in Vernal which is still there today.  He worked in the oil patch most of the rest of his life, except for a whirlwind few months in California where he owned a carwash.  He also spent a few years hauling water for the Nevada Test Site in Las Vegas.  Coming back to Vernal, he owned Oilfield Casing Company, and Parrish Oil Tools, from 1972 until 1985.  At this point he started Westates Casing Tools.  He ran that company until he was 90 years of age.  He was a hard worker and retirement did not suit him.  The oil patch was in his blood.  He loved it.  Not very many people could keep up with him.

Gene was a very strong, tough guy, and set in his ways.  No one could get him to change his mind once he had it set.  He lived to work.  His one and only hobby was to go fishing in Alaska every year, which he did for 30 years.  He also enjoyed putting on a fish fry every year. He lived a very full life and was not shy about telling you some great stories.  I’m sure each and everyone of you would have a great story or comment about Gene McFarland.  His generosity was abounding, along with his opinion.  He had a lot of quirky sayings that I’m sure we have all heard – “Well they’re a different breed of cat, Don’t be negative.  Just let it roll off your back like a duck, I’m full as a tick, dumb as a goose.”  And every day towards the last, he would say, “Well, I woke up this morning!!  Let’s go!”

Keep your memories of him.

Life is pretty simple, you live you die.

The trails you leave behind tell your story,

Memories of you live on in everyone you have touched along the way.

Thou shall return to the ground for that is wast you came. (Genesis 3:19)

Memorial services will be held sometime in the Spring.

To order memorial trees or send flowers to the family in memory of Gene McFarland, please visit our flower store.
Send a Sympathy Card