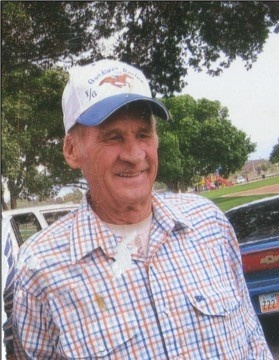 Dale Christy (Frosty) Gardiner was born on January 11, 1934, in Vernal, Utah to Carl and Zina Palmer Gardiner.  He was the 5th of 9 children. He served in the US Army from 1953-1955.  He married Marilyn Eaton, together they had 3 boys, Doug, Gary and Brett.  They later divorced.  He married Helen Poer on December 30, 1997; they have lived their lives together in Vernal.

When the boys were young, he traveled to Colorado, Wyoming, California and Utah while working for the US government performing core drilling to test for strength for dams that were being built.  They eventually settled in Vernal where he worked in the oilfield industry.  He later picked up a passion for horse racing.  He owned, trained and bred several horses.  He met many lifelong friends at the race tracks.  Frosty was nominated by employees, horsemen, jockeys and fans to receive the Wyoming Downs Honorary Mile Award and had a race named after him.  Everyone that nominated him cited his great sense of humor and willingness to help everyone. During this time he started building and selling horse walkers. He never met a stranger and enjoyed building and delivering the walkers to people in several states whom he built friendships with.

Frosty always had a joke to tell, always telling his grandchildren a new joke whenever he saw them. He was telling new jokes up to his very last days. Those days will be greatly missed.

He is preceded in death by his parents Carl and Zina Gardiner, brothers, Garl, Deloy (Al),Udell (Fat), John, sisters, Deon and Mary, and his “favorite grandchild” Jace.

Funeral services for "Frosty" Gardiner Dale Christy Gardiner will be conducted on Tuesday, August 17, 2021  at 11:00 AM at the Naples Chapel of the Church of Jesus Christ of Latter Day Saints. (2313 South 1500 East ) Viewings will be Monday at Blackburn Vernal Mortuary from 6-8 p.m. and Tuesday 9:45-10:45  a.m. at the Church. Burial in the Vernal Memorial Park, with Military Honors from the American Legion.

To order memorial trees or send flowers to the family in memory of Frosty Dale Christy Gardiner, please visit our flower store.