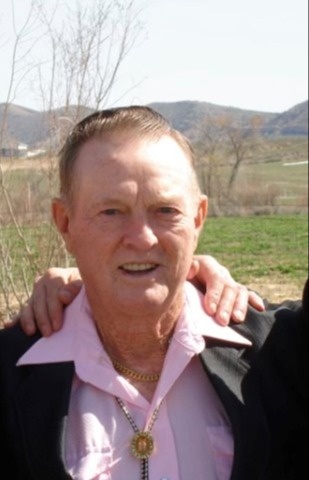 Junior was born in a little country house in Stanton County Kansas on January 26, 1932. He was the youngest of 3 children born to Irvin H. Lewis and Effie (Mae) Hardin. The eldest a sister Ethel Lorraine Lewis Tucker Floyd, and brother John Clinton Lewis. All have preceded him in death. His fondest early memories include horse-riding, and he rode his horse to Bear Creek to School. (He never lost that love for horses.)

He graduated from Syracuse High School in 1950. He served in the Army during the Korean Conflict (1952-53) and returned to Syracuse in 1953. He married Rosa “Nell” Squire on November 21, 1954. To that union were born Charles, Julie (a special needs daughter) and Jeri. Charles married Denise (Brown) and Jeri married Rod Grove. These unions brought 5 vivacious Grandsons into the Family Tree.

They all survive along with numerous nieces, nephews, family, and friends.
Junior loved equipment, cars, motorcycles, horses, and adventures. His life took him on many adventures from farming in Kansas, to a ranch in Oregon (where he had horses again), to the oil fields of Utah. One of his passions was to missions and church building and he used his talents often to help with these passions.

He always had an ornery streak and bright blue eyes that twinkled when he was being ornery or telling jokes and a grin that has been inherited through the generations.

He had that same glint in his eyes when he would tell us that when he got to Heaven that he wanted to tend the horses. (He quoted the scripture about Jesus returning on a white horse as proof that there were horses in Heaven.) So, until we meet again, enjoy the ride.

Funeral Services for Ervin "JR" Henry Lewis will be held Thursday, August 11, 2022 at 11 AM at the Blackburn Vernal Mortuary.

A Viewing will be held 1 hour prior.

Burial with Military Honors will be Saturday at 11:30 AM at the Syracuse, Kansas Cemetery.

To order memorial trees or send flowers to the family in memory of Irvin (JR) Henry Lewis, please visit our flower store.