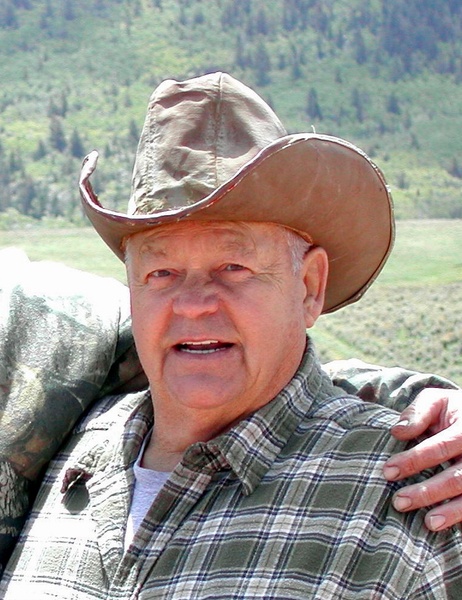 Enes Ray Hatch, 89, passed away peacefully in his Tridell home surrounded by family, Friday, December 15, 2017, He was born Oct 13, 1928 in Vernal, Utah to Monroe (Brownie) and Sarah Christina Hullinger Hatch. He was the last of eight children. He had a baby brother who was stillborn. Enes attended Central Elementary School and graduated from Uintah High School in 1947. He began working in the Gilsonite mine, helping his parents with their financial needs and expenses. On August 17, 1949 he married the love of his life, Lea Mae Kitchen in the Salt Lake Temple, in Salt Lake City, Utah. They were blessed with seven children. He and Lea Mae resided in Vernal until 1979, moving to Tridell to care for Lea's aging parents. They have lived in Tridell since. He was a devoted and active member of the Church of Jesus Christ of Latter-day Saints, of which he served in many positions, one of which was a Seventy for many years as a missionary. Enes gladly shared his thoughts and conviction of his beliefs. Enes and Lea Mae served a 3 month temple mission at the St. George Temple, in St. George, Utah and also served as Ordinance Workers in the Vernal Utah Temple. He worked hard all of his life, driving trucks, hauling logs, oil, and phosphate, and gained a good reputation as a trustworthy driver. Many company men requested he be the driver for their trucks. He loved life. He was devoted to his family. He spent time with his family, hunting, fishing, taking drives up the mountains, enjoying nature and enjoying the beauty of this earth. He liked to oil paint and sketch pictures. His sketches were very detailed oriented. He will forever be remembered for his contagious grin and the twinkle in his eye. He loved to tease. He was a great story teller, embellishing and exaggerating stories. His grin gave him away. He and Lea have cared for and helped many troubled children by opening their home and hearts. He gladly gave of his time and resources in helping them and many others. Enes and Lea participated in the Indian Placement Program, in which the Hatch family was blessed in helping and getting to know James Nelson, a young Navajo Indian. James loved Enes, and even named his son after Enes. Enes relished cars and trucks. His favorites were his old 1956 black Mercury. He installed loud pipes because he loved the loud sound, which embarrassed some of his children, a 1959 red and white cab over snug nosed Jeep, and his 1976 Chevy Blazer, a grandson now posses and it still runs today. He was a "jack of all trades" for he could fix and repair almost anything. He rarely had to rely on others to repair anything. Enes was a "handyman". His girls all wondered why their husbands weren't able to fix everything when they were married. Enes is survived by the love of his life, Lea Mae, his children, Sandra Wallen, Mareta Oaks, Sue Hatch (daughter in law), Christine (Raymond) Martinsen, Kathleen (Dennis) Sharp, Scott (Tammy) Hatch, Carol (Todd) Massey, 30 grandchildren, and 73 great grandchildren, and 8 great great grandchildren, and many nieces and nephews. Funeral services will be conducted on Friday, December 22, 2017 at 11:00 a.m. at the Tridell LDS Ward Chapel (9250 North Tridell Hwy). A viewing Thursday from 6-8 PM at the Blackburn & Sons Vernal Mortuary and at the Chapel one hour prior to the services. Burial will be in the Tridell Cemetery, under the care and direction of the Blackburn and Sons Vernal Mortuary & Cremation Care.

To order memorial trees or send flowers to the family in memory of Enes Ray Hatch, please visit our flower store.