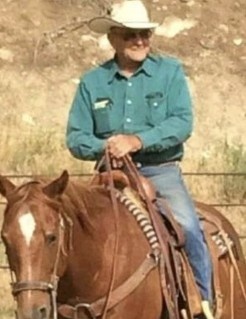 He was born in Collbran, Colorado, on October 24, 1947, to the late Jack and Lois Atwood. Eddie earned a GED from Meeker High School. He married Carol Crawford on August 28th, 1965. After her passing, he later married Alice Norvell on October 7th, 2016.

Eddie was a beloved husband, father, grandfather and friend. He was most commonly known as Pops, EJ, or pops-aroonie. He was a genuine jokester, and a real time cowboy. He was a very caring and compassionate person. Hunting, roping, camping, fishing, cowboying and spoon playing were some of the things he enjoyed. Most of all, he treasured his family and friends.

Eddie is proceeded in death by his parents, three brothers; Marvin, Jimmy, and Duain, three sisters; Jackie, Clela, and Juanita, both wives; Carol Atwood and Alice Atwood, and one great grandson; Mason Nunn.

Funeral services will be held at the Rio Blanco County Fairgrounds 4-H Building in Meeker at 11:00a.m. on Saturday, March 2nd, 2019. Viewing at the 4-H Building one hour prior to services. Burial in the Highland Cemetery. Services have been entrusted to the care of Blackburn Meeker Mortuary.

To order memorial trees or send flowers to the family in memory of Eddie Atwood, please visit our flower store.