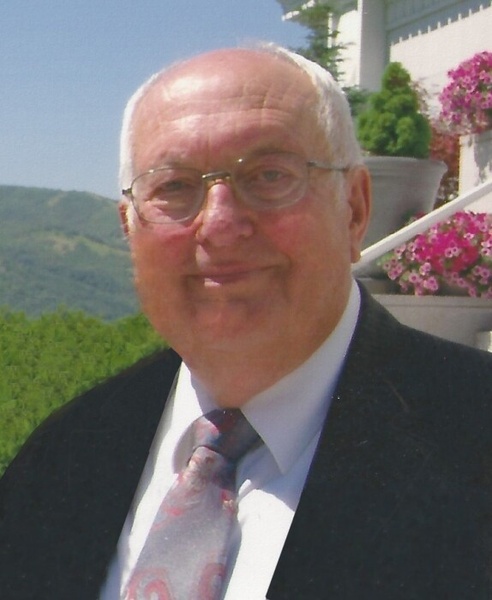 Harry Delane Kidd (known as “Dee”) passed away peacefully on December 1, 2020 at his son’s home in Vernal, UT. Dee was born on September 11, 1932, at his parent’s home in Ashley to Thomas Edward and Mary Louise Bowes Kidd. He was the 10th child of 12 children. He attended Ashley, Maeser, and Central Elementary Schools. He graduated from Uintah High School in 1950.

Dee enlisted in the Air Force in 1952, during the Korea War. He went to Lackland Air Force Base in San Antonio, Texas for basic training. Then he was sent to Kansas where he survived a tornado that cut the barracks in two that was next to his. He was supposed to go overseas to Guam, but when he got to San Francisco; his orders were changed for him to go to Korea as a purchaser for the Air Force supplies for the base. In Korea, he taught English to Korean Officers, and ordered supplies for the PX and cafeteria.

When he returned to the United States, he was stationed at Sherman Air Force Base outside of Dallas, Texas.  When he service time was up, he was undecided whether to leave the service, or reenlist. He and a friend flipped a coin to the decision, and he went home to Vernal in 1956.

He returned to Vernal, and went to work for the Bureau of Reclamation keeping books during the building of the Flaming Gorge Dam. Then the Forest Service hired him to be a bookkeeper in Vernal. He had the opportunity to fly to several forest fire locations to do payroll for the firefighters.

He then served a mission to the Southern States for the Church of Jesus Christ of Latter-day Saints. After he returned from his mission, he went to work at Stauffer Chemical in the lab. He was later asked to be the buyer and managed the plant’s warehouse; at this point in time the plant was purchased by Chevron. He worked at the phosphate plant for 32 years.  After he retired from the phosphate plant, he missed working, so to finish his resume, he went back to work in Support Services at the Ashley Regional Medical Center for 10 years.

He married Estel Manwaring, April 3, 1969 in the Manti Temple. They have two sons Wayne and Karen Kidd of Bountiful, and Robert and Jen of Vernal; and four grandchildren. His family was the love and delight of his life.

Dee was an active member of the Church of Jesus Christ of Latter-day Saints, and served in many positions. He worked with the youth serving in the Young Men’s Presidency in Ashley Ward, and the MIA Stake Board. He also served in the Elder’s Quorum Presidency in Ashley Ward. He served as chairman of the Building Committee, and as the Stake Sunday School President. He served on the Stake High Council, and then called to serve as the first Bishop of Ashley 1st Ward. He also served as the Stake Family History Chairman, and as a name extractor. He was an outstanding home teacher for many years.

A viewing will be held Thursday 6-8 pm at the Blackburn and Sons Vernal Mortuary and Friday at the Church 9:45-10:45 Burial will be in the Vernal Memorial park with Military Honors provided by American Legion.

To order memorial trees or send flowers to the family in memory of Dee Harry Kidd, please visit our flower store.