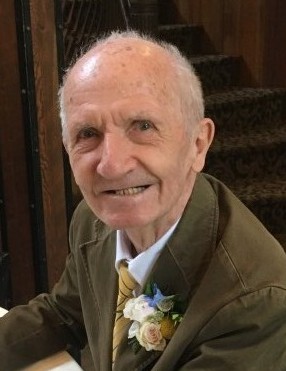 Dee Ashby Hall was the first child born to Thora Ashby and Philip Ray Hall on December 14, 1935 in Vernal, Utah. He died May 27, 2021 in Brigham City, Utah. He was the oldest brother to Ivan, Donna, Vera and Wanda. During his childhood he developed his love of animals, the outdoors and dinosaurs. Among his many animals was Dee-cow and his pet porcupine. Friends that knew him growing up still talk about his pet porcupine that he had trained.

Three words that Dee always told us he wanted to be remembered by were Student, Father and Disciple. He loved learning. His nickname growing up was “professor”. The world really was his campus. He was hardworking and held a variety of jobs. His love of dinosaurs and geology led him to his first job when he was 14 years old at the Utah Field House of Natural History museum in Vernal as a museum guide, field and laboratory assistant. Connections made here led him to employment with Harvard university as a preparator of vertebrate paleontology. He eventually went back to school at Brigham Young University but Harvard continued to employ him to prepare specimens. During this time he also served in the National Guard. He graduated in 1968 with a degree in Comparative zoology. After college he worked at the Phoenix Zoo, Hogle Zoo and Sacramento Zoo. Then he went back to his roots being from Dinosaurland and was a paleontologist for 50 years which took him to many locations. Even in his retirement he took every opportunity to learn. He even taught his teenage grandchildren things about technology they didn’t know.

Dee met AliceThurston when she would come to Vernal to visit her cousins. As he said, “This beautiful young girl was wonderfully modest, for this reason I felt comfortable around her. It was no surprise that I began to love her.” They were married in the Salt Lake Temple August 17,1959. Five girls and four boys were born to their family. There were definitely struggles and lots of sacrifices made to raise nine children, but oh so many great memories made along the way. Lots of piggy back rides, trips to zoos, the desert to hunt for fossils and dinosaur bones, rolling easter eggs down the hills, camping, swimming and dad would catch the wild animals so we could pet them and then let them loose. He continued these adventures with his 42 grandchildren and he even made them more exciting with his fun and quirky sense of humor. These grandkids to date have brought him 33 great grandchildren with more to come. His family is so precious to him.

Life is a process of becoming a better person and more Christlike. That was a life quest for Dee. He always wanted to do what was right and serve others. One of the most important things he taught his family is to always love everyone. We can’t even count the number of people that came to our home from countries all over the world and those that were in need. He lived by the motto that we are all God’s children. He was 20 years old when he left on a two year and nine month mission for The Church of Jesus Christ of Latter Day saints to Uruguay and his mission was extended as he was one of the very first missionaries in Tacna, Peru. He loved the people and their language. He would read his scriptures in spanish and was fluent his whole life. He served in many callings in the church, especially the boy scouts. After his wife passed away he spent time daily in the temple doing work for those on the other side of the veil.

If the temple was open he was there. It’s impossible to say how many lives he’s touched for good. Most importantly he loved his Heavenly Father and Savior Jesus Christ and taught his posterity to always trust the still small voice.

He is now in heaven with his wife Alice, his parents, in-laws Frank and Rhoda Thurston, sister Donna Richens, son in law Tyler Smith and many other relatives and friends who were so happy to be reunited with him.

To order memorial trees or send flowers to the family in memory of Dee Ashby Hall, please visit our flower store.
Send a Sympathy Card