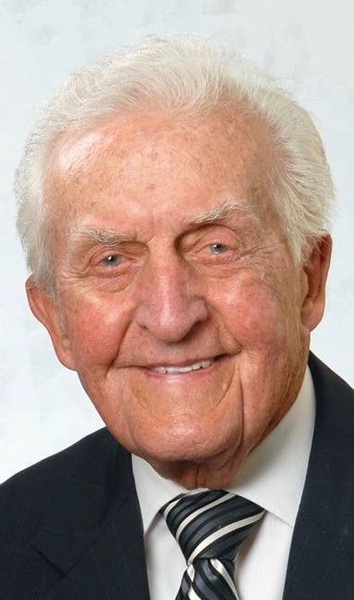 Daniel Quentin Price passed away on January 23, 2018 in Sandy, Utah. He was 98 years old and was in amazing health until shortly before his death.

Dan was born December 16, 1919 in Vernal, Utah, the second of 5 children of Mamie Arline Carpenter Price and Absalom Price.  After serving as student body president and graduating from Uintah High School in 1938, Dan briefly attended Brigham Young University and then returned to Vernal to marry his sweetheart, Clara Birchell, on May 1, 1939 and were later sealed in the Salt Lake Temple.  They were married almost 79 years.  Drafted into the Navy, Dan served aboard a destroyer escort and was in 5 major battles, including the battles of  Iwo Jima and Okinawa. He was at Tokyo Bay when Japan surrendered. Returning home, Dan graduated from Western Reserve as a Doctor of Dentistry in 1951 and practiced dentistry for 36 years until 1987. He was President of the Utah Dental Association and delegate of the American Dental Association.  Dan loved anything with a ball, including softball, bowling, golf, and volleyball. He worked hard and played hard. He was active in local civic matters, serving in Lions Club, Boy Scouts of America, Chamber of Commerce, and youth baseball.  He was active in politics, serving as City Councilman, President of Utah League of Cities and Towns, Uintah County Republican Chairman, and Utah State Representative for 4 terms representing Uintah and Daggett Counties.  He was active in his ward, serving in numerous callings, and served 2 missions with Clara in the Family History Mission.

Dan loved life and people—especially Clara and his family.  He will be missed.  Progeny include 4 children Dana (Gull), Kathlyn (Mashburn), Quentin, and Camila (Hardy); 19 grandchildren; and 54 great grandchildren.  Funeral services will be held Saturday, February 3, 2018 at 11:00 AM at the Vernal 3rd Ward Chapel, next to the temple. (475 West 100 South), Vernal, Utah. Viewing for family and friends will be at the Blackburn & Sons Vernal Mortuary from 6-8 PM and at the Chapel one hour prior to the services. Burial will be in the Vernal Memorial Park with Military Honors provided by American Legion, United States Navy, Utah Guard, & The Patriot Guard Riders of Utah. Under the direction of the Blackburn & Sons Vernal Mortuary & Cremation Care.

To order memorial trees or send flowers to the family in memory of Daniel Quentin Price, please visit our flower store.