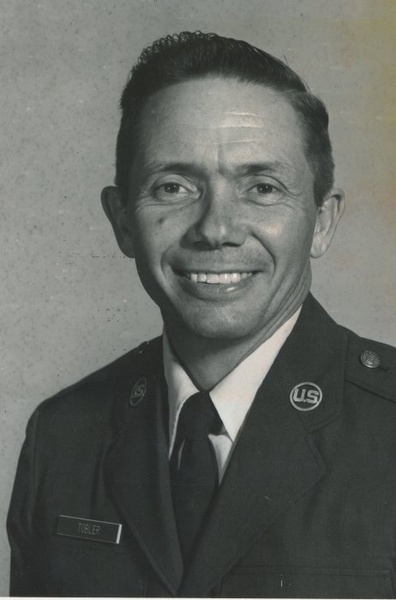 Clifford Casper Tobler, 84, our incredible husband, dad, brother, grandpa, uncle and friend was welcomed home with open arms by our loving Heavenly Father; along with thousands of thankful angels that are eternally blessed for his tireless family history service. We can’t help but picture the sweet reunion he is having and the outpouring of love and thanks he is receiving.

If you knew him, you knew everything he loved, fought for, and honored with every bit of strength he had. He loved and served his Heavenly Father and Savior, Jesus Christ, his family, and his country.

Clifford Casper Tobler was born May 7, 1935 in Provo, Utah to Edwin and Vesta Tobler. He was the oldest of 3 children. Clifford loved and protected his younger brother and sister, Kenneth and AnnaMae.  Clifford grew up in Lakeview, Utah where he enjoyed playing baseball and working hard at Cherry Hill Farm helping to support his family. He graduated from Lincoln High School then went to work at AT&T saving money for his mission.

Clifford served as a missionary in Switzerland for 2½ years. After his mission, he returned home to his “sweetheart” fiancé Joyce Laws. They were married in the Salt Lake Temple on February 14th, 1958 and sealed for time and all eternity. Clifford joined the army and was sent to Arizona. After his service they returned to Provo where Clifford attended Utah Technical College and BYU. They moved to Bountiful when Clifford worked at Fort Douglas. During this time Clifford was drafted and had to leave his wife and kids home while he served honorably in the Vietnam War. He then worked at the Utah Air National Guard for many years. Then they moved to Vernal so Clifford could work for the Western Area Power Administration.

Together Clifford and Joyce raised 6 kids and served two LDS missions; one to the Swiss Temple, and another to the Freiberg Germany Temple. They were also faithful Temple workers for over 15 years in the Vernal Temple. They were beloved companions through all of this life and we know they will continue to serve together in the eternities.

Clifford’s hard work, influence, and testimony made an impact on the lives of all he served. He served in countless callings for The Church of Jesus Christ of Latter-Day Saints; including Elders Quorum President, Seventy and Young Men’s President. He served as Scout Master for years, receiving the Silver Beaver award and helping many boys become Eagle Scouts. He continued to selflessly serve others and his country throughout his life. Recently Clifford served in the American Legion and devoted his life to genealogy, temple work, and the lives of others.

He leaves behind a legacy and testimony in all of us. He is survived by his sweetheart-Joyce Laws Tobler, sister-AnnaMae Moulton and his children-Jill Henrie, Craig Tobler, Heidi Tobler, Evon Hanson (Chris), Michael Tobler (Luz Nelsy), Angela Bristol (Kent). He has 23 Grandkids, 18 Great-grandkids and many nieces & nephews.

Clifford completed his earthly mission on Sunday May 12, 2019 only to start another one and be reunited with his brother, father and his sweet Mother on Mother’s Day.

Viewings will be held at the Blackburn and Sons Vernal Mortuary in Vernal on Wednesday May 15th from 6:00-8:00p.m. and Thursday, May 16th at the Glines Stake Center, 78 South Aggie Blvd. from 9:30-10:30 a.m. with funeral service to follow at 11:00a.m. Burial services will then be held at the Provo City Cemetery. Services Entrusted by Blackburn and Sons Vernal Mortuary and Cremation Care.

To order memorial trees or send flowers to the family in memory of Clifford Casper Tobler, please visit our flower store.