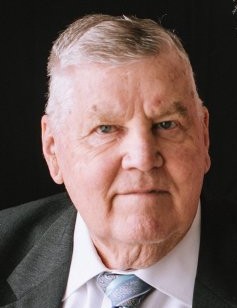 Our beloved father, grandfather, brother, uncle, friend, and sweetheart, Cal Dee Reynolds, passed away on November 03, 2018, surrounded by his family.

He was born August 29, 1934, in a private home in Maeser to Fredrick Moroni and Zelda Foy Reynolds.  He learned at a very early age how to work hard. His father owned a butcher shop and he worked closely with his father as a meat cutter, and later in the grocery business.

Cal Dee married his sweetheart, Kathy Adams Reynolds, on March 27, 1958. They celebrated their 60th anniversary this year. They raised four children, of whom Cal Dee could not have been more proud, and who later gave him the grandchildren who were the highlights of his life.

He served in many capacities in the The Church of Jesus Christ of Latter-Day Saints, including serving a mission from 1954-1956 in the New England States, was on High Council, acted as bishop of the Vernal 8th Ward, was a devoted home teacher, and performed in countless other various capacities.

Cal Dee served on the Vernal City Council for several years. He very much enjoyed community service and he always believed Vernal to be the best place in the world.

Cal Dee had a way of making everyone love him. His loving nature and quick, dry humor will be sorely missed.

Funeral services will be Saturday, November 10, 2018 at 11AM at the Latter-Day Saint Chapel at the Ashley Stake Center. A viewing will be held Friday from 6:00pm to 8:00pm at Blackburn & Sons Vernal Mortuary Funeral Home in Vernal. There will be another viewing on Saturday morning from 9:45 am to 10:45 am at the church. Interment will be at Rock Point Cemetery, with Military Honors provided by the American Legion.  Under the care and direction of the Blackburn & Sons Vernal Mortuary & Cremation Care.

To order memorial trees or send flowers to the family in memory of Cal Dee Reynolds, please visit our flower store.
Send a Sympathy Card