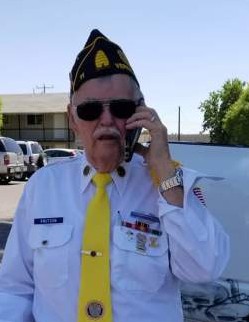 Allen James Knutson, age 84, of Vernal passed away in Vernal on November 22, 2019. He was born September 10, 1935 in Colgate, North Dakota to Oriville and Frances Young Knutson. He married Janice Powell January 2, 1972 in Elko, Nevada. They were sealed later in the Ogden LDS Temple. Allen was a proud member of the American Legion Post 11. He served his country form 1957-1960 in the Army and then served in the Air Force National Guard from 1969-1970. Allen loved his country. He retired in 1993 from the Federal Government after 34 years of service. He worked at the Grand Forks Air Force Base, Hillfield Air Force Base, and the Tooele Army Depot. He was known for his great since of humor, he liked to joke. If you asked him how he was doing you would get a “Hunky Dory”. Allen was independent, hard working, and loyal. He served in many callings with the Church of Jesus Christ of Latter-Day Saint. He loved his family. Allen enjoyed camping, fishing and his dog “Bella”.

Funeral Services will be Saturday November 30, 2019 at 11:00 AM at the Vernal 4th Church of Jesus Christ of Latter Day Saints. (235 East 600 South) A viewing will be at the church from 9:45-10:45 prior to the services. Burial will be in the Vernal Memorial Park with Military Honors provided by American Legion Post 11. Under the care and direction of the Blackburn & Sons Vernal Mortuary & Cremation Care.

Funeral services will be Saturday, November 30, 2019 at 11:00 AM at the Vernal 4th Ward Chapel. Viewing will be one hour prior to the services. Burial will be in the Vernal Memorial Park with Military Honors provided by American Legion.

To order memorial trees or send flowers to the family in memory of Allen Knutson, please visit our flower store.
Send a Sympathy Card